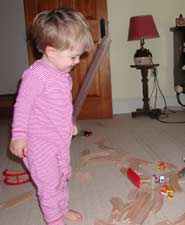 October 20, 2001 - Saturday
Harry has recently re-entered the somewhat cute, mostly annoying, and absolutely expected little-boy phase of banging. He did this several months ago, but this time he's very mobile and potentially more destructive. He uses almost any available tool (his mother and I tend to favor the cardboard innards of vanquished rolls of paper towels over harder kitchen implements, but the choice is rarely ours) and isn't entirely picky about selecting a target. We try to guide him away from more fragile objects, but sometimes it seems like there's no fighting nature.

At least his most frequent targets are those things that are most visibly destructible, like the recently constructed Megabloks buildings or an elaborate train circuit. It's easy to see how this destructive phase is taking hold of him, too. He'd been talking a lot about having a tunnel for the train tracks lately, so I recently made him one out of Megabloks. He seemed to love it, too, but with barely a trial run with the toy train, Harry started to bang and wreck. Naturally, the next few times we played with the trains Harry demanded another tunnel, only to destroy it again and again as soon as he loses the moment's interest in the trains. Of course, it has occurred to me that Harry may just be demanding these continuous rebuilds specifically so he can bang away